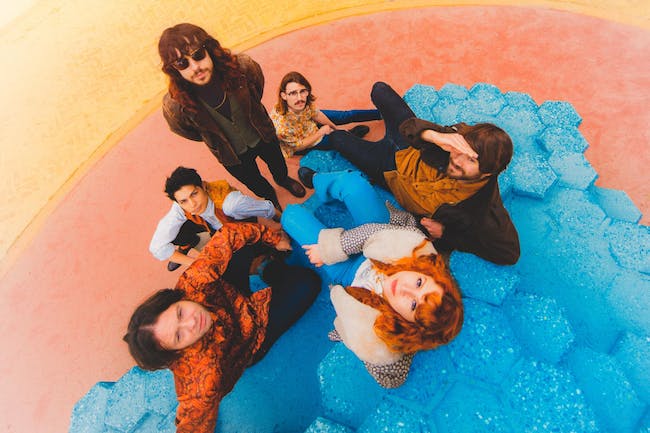 Turkish psych folk band Altin Gün are easy to fall in love with. When ATO Records saw them play at King Gizzard and the Lizard Wizard’s Gizzfest 2018 in Australia, we immediately knew we had sign them. The band, which hails from Amsterdam but comes from various backgrounds (Turkish, Indonesian, Dutch) create music that opens doors between traditional Turkish folk songs and psych.

On April 26, 2019, Altin Gün released their sophomore album Gece, which follows their 2017 acclaimed debut record On. With their new effort, the band continue to experiment, opening sonic portals previously unexplored between genres. The traditional folk songs Altin Gün has re-worked for Gece become nearly unrecognizable in their talented hands, as they deftly change time signatures, adding new sounds and layers to each track. The result is a sparkling album that is guaranteed to lift the mood of any room it is played in.

Snake Oil was established in 2011 by Jason Labbe and began as a collective of over a dozen musicians, living all over the country, who used home recording technologies and file sharing to collaborate on three hard-to-categorize instrumental releases: a self-titled LP, a 7” EP, and a second LP titled The Train is White and the Moon is Strong. Over the next several years, a core line-up of musicians emerged and Snake Oil regularly took to the stage, sharing bills with bands as diverse as Mates of State, Acid Mothers Temple, and Deerhoof. A commission by NPR’s Story Corps brought the band out of a short hiatus with a new line-up. Snake Oil’s long-awaited new LP, Dying of Sunsets, is out now on Safety Meeting Records. Departing from their usual recording process, the new LP was tracked live to 2” tape at Brooklyn’s Seaside Lounge by Charles Burst and Jason Labbe. This record also marks a drastic stylistic change for the band: the new material features vocals by keyboardist Emily Lee (Shearwater, Loma, Stephen Brodsky) and new guitarist Kelly L’Heureux (Atrina). Their vocally-driven arrangements act as compliment and counterpoint to the fuzzy psychedelic instrumentals, continuing to draw on influences ranging from Sabbath to CAN to Bitches Brew.