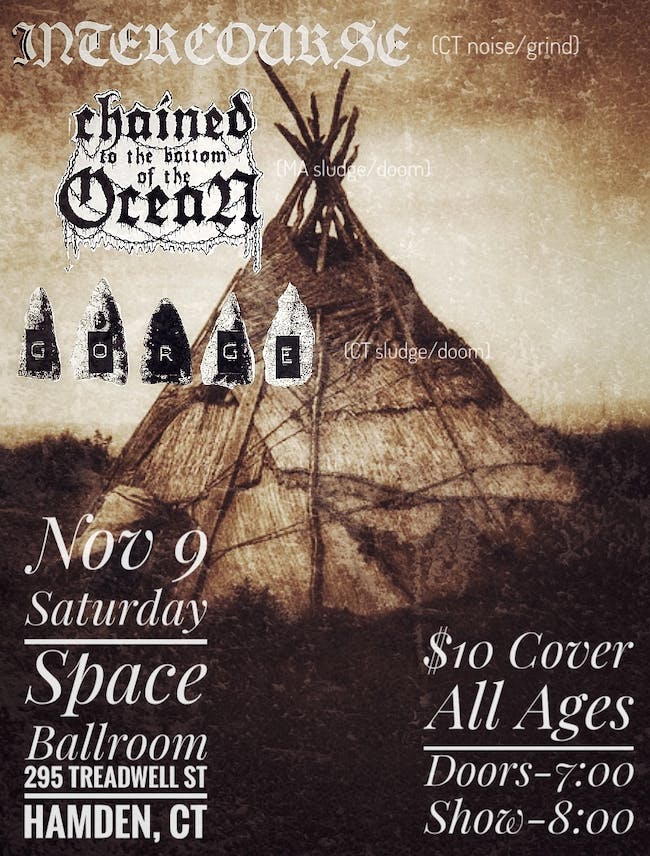 Chained to the Bottom of the Ocean, Gorge

Known for their bombastic live shows and fearless stage presence, Intercourse is spearheading CT's burgeoning outsider hardcore scene. Founded in 2014 by vocalist Tarek Ahmed, a self-titled EP soon followed. Though early lineups fluctuated under the weight of the madness, the band soon found a rock-solid foundation in guitarist Jason Barnes, drummer Caleb Porter, and bassist Timmy Leonard. This group led Intercourse into their most prolific period yet, resulting in a string of releases beginning with 2016's Pissing into the Abyss. 2017 saw the band perform at venues across New England and the Mid-Atlantic as well as a split release with NC's the Asound.

In 2018, Intercourse released their first full-length, Everything is Pornography When You've Got an Imagination, via Constant Disappointment Records. Lauded by multiple publications, this record defines Intercourse’s hallmark sound of odd time-signature changes, heavy riffing, and sarcastically nihilistic lyrics, all delivered at full volume. They are currently performing across the Northeast in support of their full-length, and show no signs of slowing down.

Chained to the Bottom of the Ocean

Our band is from a section of Connecticut along the Farmington river where the water flows north to get around a massive bassalt ridgeline known as the Metacomet trail. The force of the river's flow blasted through the rock billions of years ago creating what is known as the Tariff ville gorge. Along these volcanic shorelines and within the twisted forest valleys is a rich prehistoric tale of eastern forest nativetribes. Tales of ice aged hunters and shamanistic ritual, along with first European contact history. Our hometown of Simsbury was one of countless early European settlements burned to the ground by hostile natives attempting to reclaim their land, and igniting the beginning of Metacomet's war in 1675. Gorge has unearthed these true stories with many years research and through our music we bring back to life with great historical accuracy the tales of a native people and their journey ofmigration and cultural development beginning at the Land Bridge of Siberia and Alaska, and through our heavy trudging riffs, follow the same spirit of the mammoth herd our ancestors hunted during the evolution of one of the most fantastic cultures known to man.