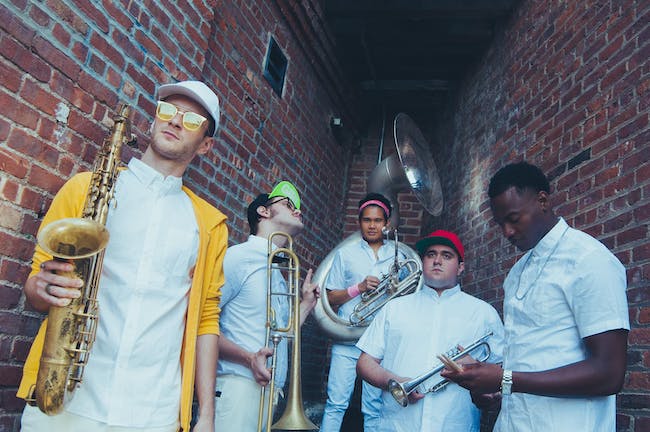 ***In the interest of public health, Lucky Chops has postponed their 4/2 show until 10/3. Hold onto your tickets as they will be honored for the rescheduled date. Refunds are available at point of purchase until 4/27 at 10PM.***

Lucky Chops has been unleashing high-energy brassy funk on the world since forming in NYC in 2006. The intensity of the band’s energy is fueled by their desire to share the healing and inspirational power of music with others. That power has resonated with audiences around the globe, giving the band hundreds of millions of views on their online videos and leading to live performances in more than twenty five countries. Lucky Chops maintains a busy schedule touring across several continents. The band members are also committed to music education, regularly performing clinics and educational outreaches to help train and inspire the next generation of musicians.

Phat A$tronaut is an organically grown, experimental soul ensemble from the funkier parts of Connecticut. The band formed shortly after singer/songwriter, Chad Browne-Springer, and guitarist/musical director, Mark Lyon, met on a D'Angelo tribute gig. Their sound consists of booty shaking rhythms and meticulously crafted arrangements with pop sensible songwriting at the forefront. Phat A$tronaut acknowledges many influences, including Prince, Hendrix, D'Angelo, Erykah, Fela, Frank Ocean, Knower, Hiatus Kayote, and many more, while maintaining undeniable originality. In just over a year of performing, Phat A$tronaut has become a high demand act on the regional scene, having performed at some of the area's top venues including Brooklyn Bowl, Toad's Place, The Warehouse (FTC), and many more. Be sure to check out Phat A$tronaut's live album, 'Live at Brooklyn Bowl' on bandcamp and studio album 'The Fifth Dimension' on all platforms.