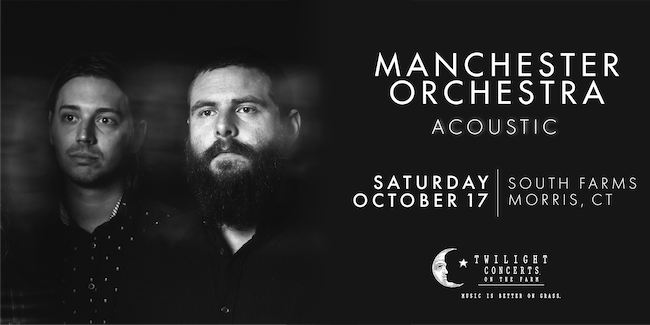 Manchester Orchestra had always prided themselves on their approach. The Atlanta-based band, led by Andy Hull and co-writer Robert McDowell (who is also Hull’s brother-in-law and lifelong friend), had spent their career challenging each other to build a poignant, exhilarating narrative with each new album and EP. The band had worked relentlessly to cultivate a passionate fan base the old-fashioned way: releasing music, making music videos, and touring (most recently with drummer Tim Very and bassist Andy Prince). Their previous long-player, 2014’s Cope, had even spawned a cover album of itself by its creators, an acoustic-reworking and reimagining of its songs with a heavily emotional bent that they called Hope. But now — thirty years old, stable, and a first-time father — Hull found himself facing a crisis of inspiration. Since the beginning, each subsequent Manchester Orchestra album had been a grand statement for that specific moment in their career, originated in a desire to push themselves forward creatively. The desire to achieve greatness is often followed by a need for that same desire to evolve. So, for a musician used to writing out of self-reflection, what do you sing about when life is good? For a band on record number five and seeking innovation, how do you untangle yourself from the past? How do you write songs about being happy?

It was becoming clear that they required a completely new approach from an entirely different sphere and set of faculties — and, lo and behold, just such a moment arrived when Hull and McDowell were offered the chance to score a movie.

In the midst of the Cope/Hope LP release cycle, the directing duo The Daniels — who had created a dense, theatrical music video for Manchester Orchestra’s “Simple Math” in 2011, winning Vimeo’s “Music Video of the Year” in the process — countered Hull and McDowell’s request for them to work on another video with the idea of scoring the directors’ in-the-works feature film debut, Swiss Army Man. They had never written a film score before, but the pair of musicians happily rose to the challenge. The Daniels’ immediate guideline was: “Cool, don’t use any instruments.” In the project, Hull and McDowell recognized an opportunity to leave their comfort zone and to push emotion to new heights.

“Cope was very much a record where we knew what we wanted and it was a goal in our heads we could chase; that was followed by the polar opposite in Hope. But once we started work on the soundtrack, we threw the textbook out and started approaching music against our instincts,” says McDowell. “I think the score kind of was like going back and getting a doctorate. Once we finished it, there was this whole new realm of situations and sounds that we could go down.”

Swiss Army Man was a weird — albeit cult — Sundance hit, and the film’s New York Times-lauded “marvelously melancholic music” earned rave reviews around the world. Riding that excitement, Hull and McDowell decamped to a cabin near Asheville, North Carolina, with bandmates Very and Prince to write a new record. Inspired by their experience creating the score, they seized the chance to rethink Manchester Orchestra’s typical methods of working.

“We’re a band that loves to use heavy, crunchy guitars,” says Hull. “We wondered how we could limit the use of that, so that when the guitars come in they can be creative and impactful. For Swiss Army Man we had to make seventy minutes of music with our hands tied behind our backs. When you’re creating all the sounds you need just from the human voice, it allows you to rethink what is possible, and determine what is really needed. We wanted to make an album in a ‘non-Manchester’ way if there is such a thing. So we started looking for people to help us do that.”

This process gave them new ideas of how to think about writing, how songs could flow, and how to layer melodies on top of one another to propel the tune into a new emotional arena. To manifest this vision, the band turned to producer Catherine Marks (Foals, PJ Harvey, The Killers, Interpol) and began working with her at Echo Mountain studio in Asheville. “She just got it immediately. Catherine looked at us and said, ‘I hear Twin Peaks: The Album here,’” says Hull. The band instantly connected to her unique sonic outlook for the record: Marks wanted each song to sound like a different room. “Like you could understand where you were in the room and identify where each particular sound was coming from, pick it out with your hands and pull it out,” Marks explains, adding, “Being able to utilize the sound of the rooms we recorded it in, whether it was at Echo Mountain, or literally standing in a bath and engaging with the reverberation and reflections that those rooms provided — as opposed to manufactured reverbs — was super exciting to me.” In addition to mixing with Marks at her Assault & Battery studio in London, Manchester Orchestra also worked with John Congleton (St. Vincent, Explosions In The Sky, Angel Olsen, Cloud Nothings) in Los Angeles — gathering new sounds, adding to and widening the songs’ dimensions — as well as their longtime producer Dan Hannon, who offered an invaluable perspective that only an old friend could give. Encouraged to go against first instinct, each collaborator added their own touch to the music, pushing it to places no Manchester Orchestra record had ever gone before. As Marks says, “Throughout the entire process, the band fought for the unknown and the unquantifiable.” In thoughtfully deconstructing and rebuilding their songwriting process, the band pushed themselves to create their best album yet.

“It was a test—personally, emotionally, creatively—to see how far we could push ourselves without breaking,” says McDowell. “This record was intentionally un-compromised on every level. We made sure to explore all the options and that we were moving forward with the strongest approach for each song—strongest part, strongest melody, strongest lyric.”

Describing a rock record as “cinematic” usually implies a double-length, sprawling album with a full orchestra on every song; A Black Mile To The Surface is cinematic in that it conjures worlds. There’s magical surrealism at work, with songs about a boy with no ears (“The Alien”) and the father/sleeping child callback of “The Sunshine.” There’s a story to parse here — three brothers, an abandoned wife and child, a mysterious journey through the depths of a miles-deep mine, a narrative of twists and turns, recurring characters, alternating timelines — but the songs and melodies stand on their own.

The initial creative spark for Hull’s lyrics came from a photograph. “While we were writing the album in Asheville it was snowing heavily at the cabin. I was reminded of what it feels like to live in a place that is cyclically cold. No matter what happens you can’t escape it,” says Hull. “I had written a song with a character in South Dakota, so I started looking up pictures of ‘winter in South Dakota,’ and there it was.” What he found was a picture of a road with snow piled high forming walls on either side, maze-like; cars were frozen in time, the sky a white-nothing blur. Hull began to write songs from the perspectives of different characters who might live in the scene, and found that as he was creating these fictional stories, it became much easier for him to talk about the things that were happening in his own life. In “The Gold,” a song about a woman missing her husband as he descends into the blackness of the mines, Hull saw his own wife left alone with their young child after yet another months-long tour. As he sang these characters’ concerns, he realized he was really singing his own.

A Black Mile To The Surface is a bold record of vision and purpose, inspired by and dwelling in a sensory, cinematic experience. It’s a reinvention of sorts, both musically and personally—a sort of cosmic worldview shift. But in the end, the record’s themes are universal. On the stunning final track, Hull sings, “Let me watch you as close as a memory/ Let me hold you above all the misery/ Let me open my eyes and be glad that I got here.” Certainly, that’s a father speaking hope to his daughter, but it’s also a message to listeners. How do you write songs about being happy? With your eyes wide open, your loved ones in front of you, and the misery of the world waiting just outside the door.