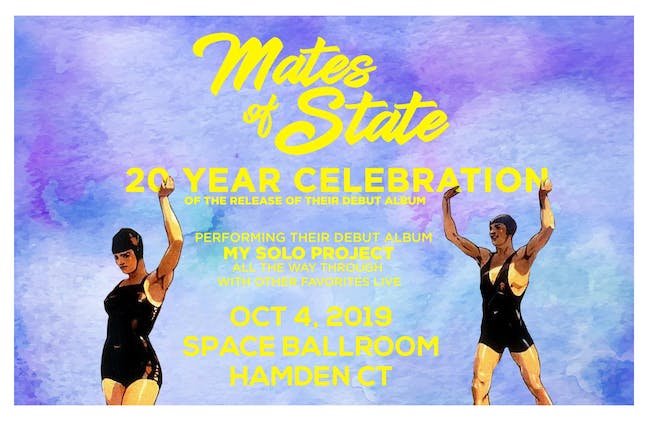 Celebrating 20 Years of Their Debut Album 'My Solo Project':

How does a band keep evolving and moving forward after 20 years? First up, embrace the modern age and the way that people are consuming music these days. "I don't like it, but the long play album format is probably dead," says Mates of State singer/drummer Jason Hammel. "Now we just want the hits. Don't bother me with filler; get me your best songs straightaway."

Rather than lamenting this shift in listening preferences, Hammel and his bandmate Kori Gardner are taking a very KISS-like approach with their new music: you wanted the best, you got the best.

The pair's new self-produced EP 'You're Going To Make It,' then, is nothing but choice cuts; five anthemic and emotionally-rich songs that will quickly take up residence in your mental jukebox; five anthemic songs that wriggle into your every waking hour like the earworms they are.

This new batch of tunes is Mates of State in its purest form. The razor sharp harmonies, shimmering new wave synth melodies, an internal warmth that can only come from a couple that has been musically and romantically involved for nearly two decades, and lyrics that speak to both personal and universal concerns.

On "Beautiful Kids," the band speaks to how, even though we are connected to one another 24/7 thanks to modern technology, a sense of loneliness still pervades. Or as Hammel puts it: "We all just want to be seen, but we won't look up from our screens so that we can be seen." "Gonna Get It" and "I Want To Run" build off the same inspiring notion of the EP's title, encouraging both themselves and their fans to keep striving no matter what the odds. And fist-pumping opener "Staring Contest" connects us to that delicious ache of schoolyard crushes and youthful love.

It's not just the manner in which Mates of State is planning to release music from here on out that is evolving, but also how the band will be presenting them on their upcoming tours of U.S. and Europe. "We're focusing more on performance as a whole and not being stuck behind our instruments," says Hammel. "We're coming to the front of the stage for some songs. Kori plays drums, Jason does some keys. Mixing up the performances in new and exciting ways."

The band is also exploring some new creative avenues this year with the release of 'The Rumperbutts,' a feature film that Hammel and Gardner acted in and composed the score for. Written and directed by Marc Brener, the film will hit theaters on May 22nd.

After a decade and and a half of acclaimed albums and live performances, and songs that have become near pop standards for a generation of music fans, it's good to know that Mates of State isn't content with coasting. Hammel and Gardner are working as hard as ever and looking excitedly toward what the future has to offer.

Blending rich vocal harmonies with lush orchestrations, Goodnight Blue Moon has created a sound that is steeped in tradition, yet entirely current. GNBM is known for their energetic, honest, and dynamic live performances, offering a refreshing take on Americana roots music.

Awarded Best Roots Act in the 2016 New England Music Awards, and Best Folk/Traditional Act in the 2018 and 2013 Connecticut Music Awards, Goodnight Blue Moon has cemented their place as one of New England's premier groups. They have shared the stage with indie-folk heavyweights Hurray for the Riff Raff, Spirit Family Reunion, Wild Child, Joe Fletcher and the Wrong Reasons, and Mother Falcon among others, in addition to creating a diverse and devoted following of their own. Goodnight Blue Moon has been regularly featured on WNPR's Where We Live and NEXT with John Dankosky. Their festival credits include CT Folk Festival, LAUNCH Music Festival, MUSIKFEST, Podunk Bluegrass Festival, I AM Festival and Block Island Music Festival. Goodnight Blue Moon's third studio album Dawning Dream was released April 2018.