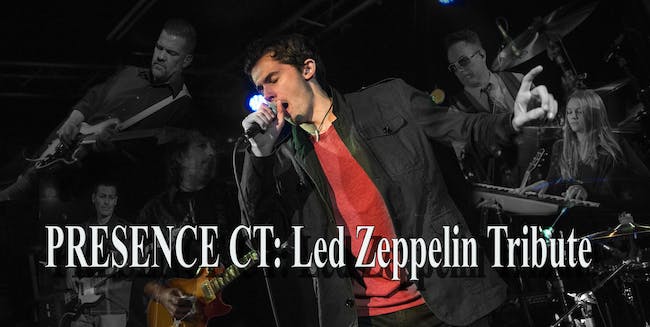 Formed in September 2016, Presence CT Led Zeppelin Tribute is one of CT's hottest bands and has been wowing audiences across the state with their blistering, spot-on renditions of Led Zeppelin's finest work, including deep tracks rarely heard elsewhere. Musicians and promoters alike have said this band is "every bit as good, if not better than the national acts."

The band brings a unique element in that they are a seven-piece outfit led by 18-year-old vocal sensation Michael Stearns (The Voice) from Cheshire, CT. The remaining band members are lauded as quintessential pros.

From the bone-chilling keys of No Quarter to the haunting harmonica of When the Levee Breaks, Presence CT Led Zeppelin Tribute will leave you breathless and wanting more.