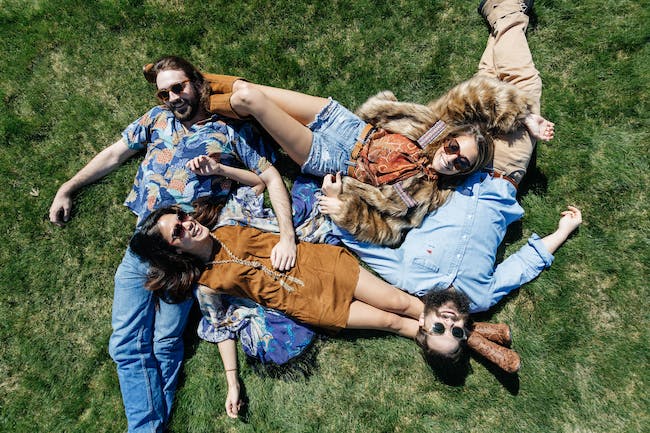 Laini and the Wildfire

Two couples from New York City turned their Sunday night jams into a heart-felt soul-pop band with songs inspired by a 12-year romance, the ups and downs of dream chasing and the belief that Good Things will come. Scruffy Pearls completed their multi-genre group with the addition of their two good friends on bass and trumpet, and have been performing regularly in New York City. They have toured opening for Lukas Nelson and Promise of the Real, Lawrence, and Parsonsfield. Their music has been described as “Amy Winehouse meets Sofi Tucker” with a mix of old school and new school vibes. Scruffy Pearls’ EP and latest singles are available on Spotify and iTunes, and they are expected to release a few more singles before the end of the year.

Laini and the Wildfire

Laini and the Wildfire is a piano-fronted pop rock trio from New Haven, CT. The band has refined their eclectic sound with the upcoming release of their latest album, Wandering, which features elements of modern pop and rock, mixed with a touch of 60s soul, all set behind Laini Marenick’s powerful vocals. Indie Spoonful (2017) writes: "Wandering is a stand-out album...Each song has potential to stand alone as a top-notch single, leaving listeners with plenty of memorable tunes that will be stuck in their head." The record highlights the pop sensibility and soulfulness of artists such as Adele, while maintaining the depth, intensity, and raw edge of female fronted rock artists like Fiona Apple and Florence + the Machine. The band has achieved their sound mainly through the use of percussive and hypnotic piano, anthemic group harmonies, soulful lead vocals, and the powerful, melodic rhythms of bass and drums—using guitars and other instrumentation subtly, only as polish for the songs. Many of the songs on 'Wandering' reflect on Laini’s future hopes, past regrets, and fear of change, as the album was written on the heels of Laini leaving her full-time job as a therapist to pursue music. 'Wandering' is the full length follow-up to Laini and the Wildfire’s debut EP (May 2016).

Since forming in 2015, the band has received positive responses from many music industry professionals. They we recently named Best Pop Band 2017 by Indie Voice Blog, were nominated for Best in State (CT) at the New England Music Awards in 2017, and their debut EP was ranked #5 album of the year 2016 (including both national and regional acts) by Cygnus Radio host G. Gone of “My Week That Was.” Soundwaves Review (2016) wrote about their self titled debut: "These songs could easily all be radio hits, yet they stand apart from the gelatinous goop of most mainstream music." The band has fostered a strong and engaged social media following on Twitter since releasing their first EP and music companies have taken notice of the band’s growth, as they have received endorsements from Westone Audio, GMS Drums, and Moniker Guitars. Laini and the Wildfire has developed a distinct identity that transcends generations and translates into a captivating live performances where the band, along with Laini's gold glitter piano, shines front and center.