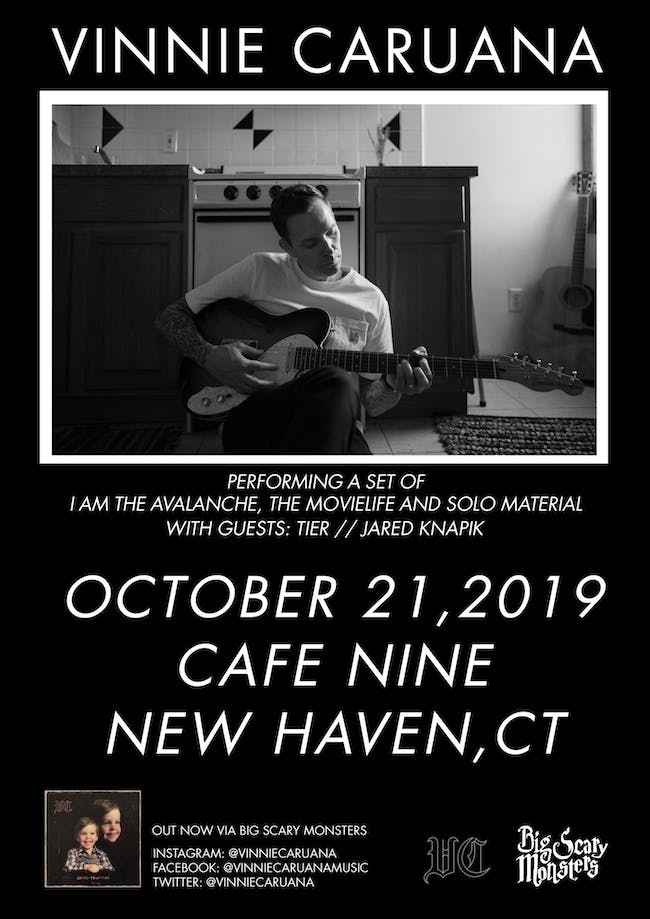 Vinnie Caruana is the singer for the band I Am The Avalanche and former front man of now defunct Long Island pop-punk band The Movielife. When not touring with I Am The Avalanche he plays intimate acoustic shows (usually in the North East)

Tier is an alternative rock and grunge band based in Middletown, CT. The band formed when ex-Night Owls vocalist Matt Banta and guitarists Dan and Travis Dings approached Middletown drummer Andrew Moore in early 2017. Their sound is rhythmically driven, yet powerful, lying somewhere between atmospheric punk and shoegaze. After the celebrated release of their introspective debut EP “Ego Death” in late 2017, Tier followed up with "Ego Death II" in February of 2019, playing a sold-out release show with internationally acclaimed CT emo band, The World is a Beautiful Place and I am No Longer Afraid to Die. This sophomore EP was the band's first physical release, pressed via Rhed Rholl Recordings.

Tier has just concluded a short Northeast tour as they finish recording new material for a late summer release.

Pulling as much influence from the punk bands he discovered in his adolescence, as from the ‘50s rock ‘n’ roll playing in the house as a kid, Jared Knapik has honed a unique and distinguishable sound all his own. Taking pages from the books of esteemed acts such as Dashboard Confessional and The Gaslight Anthem, Jared’s catalog simultaneously sounds familiar and refreshing. His, at times, bashing style of guitar playing paired with personal lyrics breed a performance that — while not in volume — in spirit, rivals that of a full band. His 2017 full length LP, More Than You’ll Ever Know, was met with praise, and Jared’s follow-up release is slated to be out this fall.