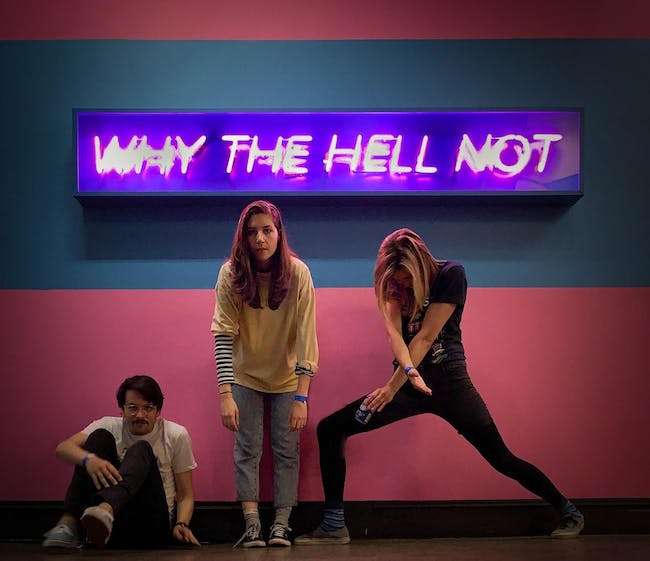 Common Blah is the debut full-length by Portland, Maine’s Weakened Friends. Founded by songwriter Sonia Sturino, bassist Annie Hoffman, band is a low pressure outlet for emotionally volatile music. Engineered and produced by Hoffman the record broadcasts heavy feelings amid screech and feedback with little more than a fuzz pedal to clog up the signal chain.

For Sturino, writing in Weakened Friends is more of a physical process than a mental one.

“I have to feel the vibration or sound coming out of my body. I need the physicality to do it, to enjoy singing it,” she says. “People probably hear the vocals and think, ‘she just puts on that weird voice,’ but it’s really just what comes out. It’s my body making that sound.”

Many of the songs reckon with deep mid-20s malaise — with the feeling of being young, stuck, and settling for less. “Sometimes, things look good on the outside, but they’re not working. That’s how it used to be for me. I’d hear, ‘You have a really cool job. You live in a cool city. Your band is cool.’ It was ‘Common Blah’ though because I was miserable. I didn’t care. Now, I’m at the other end of the spectrum. People do something that they think they’re supposed to do when it’s not what they should be doing and it doesn’t make them happy. In a lot of ways, this is the first time I’ve found happiness. I wrote the lyrics about the time before that happiness.”

On Common Blah, Weakened Friends use volume — instrumental and emotional — to reassert a sense of control in a time when daily life has slid out of tune. The album also features guest shredding by peer and kindred spirit J Mascis on the song “Hate Mail.” Common Blah is out on CD, LP, and digital download via Don Giovanni Records.

Debut albums are rarely fully-formed. They’re ground zero for artists to experiment, breathing room to allow musicians to form identities within their project. Atlanta, GA’s Blis. debut LP, No One Loves You, avoids the trope: it’s an album of a band that’s lived a lot of life, exploring sonic realms that on the surface, should not go together, but manage to find cohesion. The record mosaics their influences—the intricate rock riffs of American Football, Pedro the Lion’s midtempo balladry gone awry with crucial aggression, indie rock sensibility that has mainstream press publications referencing Modest Mouse and Silversun Pickups. It was their 2015 Starting Fires in My Parents House EP that inspired Sargent House Records to sign them, a cathartic, unexpected release that garnered press from top-tier places like Pitchfork, Stereogum and Consequence of Sound. It’s easy to see that something’s in the water—and Blis. have come to prove that it’s not just hype. Far from it.

The band officially started recording under the Blis. name a few years ago, but frontman/primary songwriter Aaron Gossett has been pursuing the project for much longer. “It’s pretty much the first musical endeavor I did after high school,” he recounts. “I started biting off more than I could chew so I had a couple of friends help me. We did a record that has since been taken offline. After that we kept going, certain people worked out, certain people didn’t and we finally solidified our lineup around 2012.” The quartet—drummer Jimi Ingman, bassist Luke Jones, guitarist Josiah Smith and Gossett—have found a system that works, though the process was arduous. In the two years since their last EP, they’re at home with their lineup, they’ve spent an impossible amount of time on the road (including a two month U.S. tour with now label mates And So I Watch You From Afar) and the most life-altering: Gossett became a father, having a son with his long-term girlfriend from a very different background—she grew up in a very wealthy, very white and very Christian household. “That’s the only thing I have to write about,” he says. “We kind of created our own family.”

"New London, Connecticut's steep and unique punk-rock history is alive and well, with Straight To VHS leading the pack. Specializing in raucous, garage rock-influenced, punk this power trio has already delivered two of the best punk-rock records from within Connecticut borders this decade – 2014’s “Weekend Weekend Weekend,” and 2016’s “Landmind.”

Straight to VHS still plays out and lights up every stage it touches. Perhaps not be the heaviest or nastiest punk band around, but what they lack in vitriol they more than make up for in memorable songs. Rumor has it they are currently in the studio with Floyd Kellogg (Violent Mae, You Scream I Scream" and a new album, "Friend Music" is forthcoming." ~ Chip Mccabe